This one really is rich, if it wasn't so funny 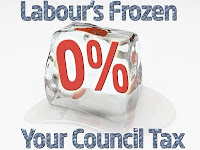 In the week before the Council budget meeting, local unions, the bankrollers of the national Labour Party, were calling for a rise to Council tax in Medway.
Over every year of the 13 years of Labour government, Council tax rose steadily each year, and now stands at more than double the rates they were in 1997. In the first local budget following the Conservative coalition government, Council tax rates in Medway have been frozen ...... you work out the obvious difference!
The above posting on local Labour websites really is beyond belief.
As Labour are very much in the minority on Medway Council and all of their members voted AGAINST the budget presented by the Conservative group (which proposed a tax freeze), how the Labour group can claim to have had any impact in the sensible decision to freeze Council tax levels beggars belief. That they now claim that it was they who have delivered a Council tax freeze is somewhat laughable.
Posted by Craig Mackinlay - PPC South Thanet at 14:46